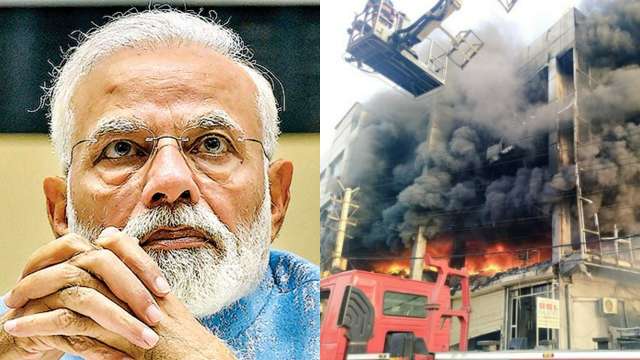 Prime Minister Narendra Modi on Friday expressed condolences over the fire tragedy in Delhi’s Mundka and wished a speedy recovery to the injured. “Extremely saddened by the loss of lives due to a tragic fire in Delhi. My thoughts are with the bereaved families. I wish the injured a speedy recovery,” tweeted PM Modi today.

“The incident of fire in Delhi’s Mundka is very sad. I am in constant touch with the concerned officials, the administration is engaged in relief and rescue work. NDRF is also reaching there soon. Our priority is to evacuate people and provide immediate treatment to the injured,” Shah tweeted.

As many as 26 bodies were recovered in the fire at 3-storey commercial building that broke out this evening near Delhi’s Mundka metro station, said Sunil Choudhary, Deputy Chief Fire Officer, Delhi Fire Service. According to the Deputy Commissioner of Police (Outer District) Sameer Sharma, 50 people were rescued so far and rescue operation is underway.

Also, READ: Clerical error by SBI staffer leads to Rs 1.5 crore worth of wrong transfer, 15 employees get Rs 10 lakh each

Earlier in the day, on preliminary enquiry, it was found that it is a three-story commercial building generally used for providing office space for companies, the police said.The fire broke on the 1st floor of the building which is an office of a CCTV cameras and router manufacturing company. The owner of the company is in police custody.”Efforts are being made to control the situation,” the police said.Further details are awaited.